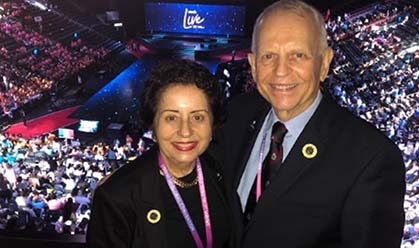 Congratulations to Executive Diamond Directors, Seta Der Artinian and Hubert Krause of USANA Health Sciences for being one of our Mark of Distinction Award winners.

This award recognizes an independent salesperson (or team) who upholds the values of trust and integrity, which are so vital to the direct selling industry, as well as being a leader who inspires others to achieve their utmost potential.

Seta Der Artinian and Hubert Krause have been with USANA Health Sciences since it launched in Canada over 25 years ago. They have dedicated their lives to promoting USANA and the industry. They founded USANA in Quebec and Germany and are also winners of USANA’s prestigious Dr. Wentz Vision award.

They provide mentorship and motivation to the field through keynote speeches at USANA events and Hubert has also authored a book on the basics of network marketing called You Can Do It. Seta will also be releasing a book on women in network marketing shortly.

Gina Bresciani, Director – Operations and Customer Service for USANA Health Sciences says, “Seta and Hubert are true leaders and role models for their large team. They have dedicated their lives to promoting USANA and the industry and we are extremely proud of their achievements.”

“Seta and Hubert are an example of how hard work and commitment to a company can create great opportunity,” said Peter Maddox, President of the DSA. ” Not only have they succeeded themselves, they have also invested in those around them, and we are honoured to present them with this award.”

Visit our Awards page for more information on each award winner.

📣 Speaker Announcement! Looking forward to listening to Warrington Ellacott, Chair of the Canadian Association of… https://t.co/QNngkTZrNd 13 hours ago
Members, join us in celebrating industry excellence at our DSA Canada Conference, En Route to Excellence, taking pl… https://t.co/XaK91MYXHW 4 days ago
Happy Chinese New Year! 新年快樂🧧 Happy Lunar New Year!⁠ ⁠ It's the Year of the Water Rabbit. The Rabbit is a symbol of… https://t.co/rkaFHH3yMZ 5 days ago